Pandemic aside, 2020 was a year of real progress for me in my pivot away from advertising and toward archaeology.

Archaeology? This time last year it was Shakespeare/literature, and I was looking into master’s programs, hence MidLifeLit, the lit being for literature.

Well, after looking at cost, employment, and talking to people with experience living the adjunct English professor life, I decided against it.

I’d been taking online classes at San Diego City College, so it was easy to register for classes that would count toward a Certificate in Archaeology and an AA in Anthropology. Harder, though, has been getting my college transcript evaluated, because it’s so old that it’s available only as a printed version. So far, I’ve had four copies mailed to City College and the San Diego Community College District, but I don’t think anyone is actually in the offices doing the evaluations so it could be months before they get looked at.

Meanwhile, though, I’ve been going full-tilt with online college classes. Here’s where the pandemic actually plays a supporting role, because I doubt I’d have enrolled in so much so quickly if I had to attend classes in-person. Starting in June, I took Cultural Anthropology and Biological Anthropology (with the head of the department) over the summer, and Intro to Archaeology, Human Osteology, and California Indians over the fall semester.

I’m also registered for the field class in the spring, which – if it sticks – leaves me just two classes to go for the AA and Certificate: Intro to Statistics and Artifact Analysis. So far, I’ve maintained a 4.0 GPA, which I’m actually quite proud of since I wasn’t a great student my first time through college. I seem to have learned a lot of studying techniques I didn’t use the first time round, like flash cards and multi-colored pens and highlighters.

I also completed a short certification course in Forensic Archaeology through FutureLearn and Durham University. And, since I can no longer go out metal detecting, I’m trying my hand at flintknapping. 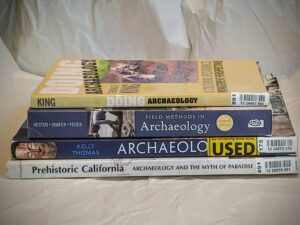 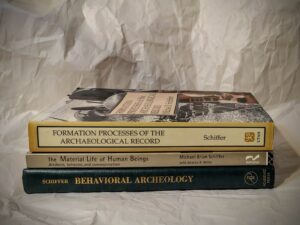 My reading has reflected these new interests. Most of my new books have been archaeology books, notably a short stack of books by Michael B. Schiffer, and a couple used textbooks that I’m reading for fun and enlightenment. I also read The Fifth Beginning by Robert L. Kelly, which reminded me a lot of Marshall McLuhan’s work on media, only through an anthropological lens. It still surprises me how much in common anthropology has with advertising, which makes sense since advertising is basically applied anthropology with sales as its metrics. 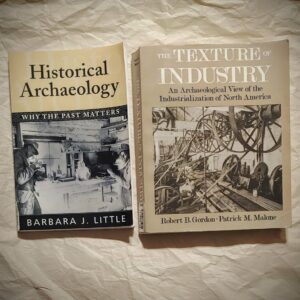 The most recent book arrivals just came today: Historical Archaeology: why the past matters by Barbara J. Little, and The Texture of Industry: an archaeological view of the industrialization of North America by Robert B; Gordon and Patrick M. Malone.

Also, I joined the San Diego Archaeological Center and the Society for Commercial Archaeology.

Looking forward, with a bit of luck, I could conceivably finish the Certificate in Archaeology program and the AA in Anthropology in 2021! That would prime me for an entry-level job in cultural resource management or commercial archaeology with one of the local companies or public agencies.

One of my professors said that a former student got hired straight out of the program to work site supervision for the utility company, which sounds ideal! I can think of nothing I’d rather do, then be outdoors looking for signs of human behavior in the environment, whether that environment is out in a field or at the bottom of a trench. Either way, it’s time travel, and it strikes me as magical right now.

I still love live theatre, and prior to the shutdown we managed to see God of Carnage at Lamplighter’s, Jitney at The Old Globe, Love Scenes at Grossmont College, Fiddler on the Roof at PHAME, and The Hollow at Lamplighter’s.

After the shutdown, online theatre came to the rescue with streaming versions of live productions! I saw One Man Two Guvnors, Jane Eyre, Hamlet, Frankenstein, Twelfth Night, Macbeth, The Merry Wives of Windsor, Henry V, and Titus Andronicus, mostly from the National Theatre or the Globe Theatre or Shakespeare By The Sea. I also got into opera, watching the New York Met’s versions of Macbeth, Falstaff, Die Walkyrie, and the Niebelungenlied. The whole family saw Treasure Island, Hamilton, and a year-end traditional British panto, Dick Whittington.

So I’ve actually had an incredibly productive 2020, in a small way because of the shutdown. And I’m hoping for an even more-productive 2021 – I might even complete my reinvention and head into 2022 with a fresh start. What an achievement that would be!