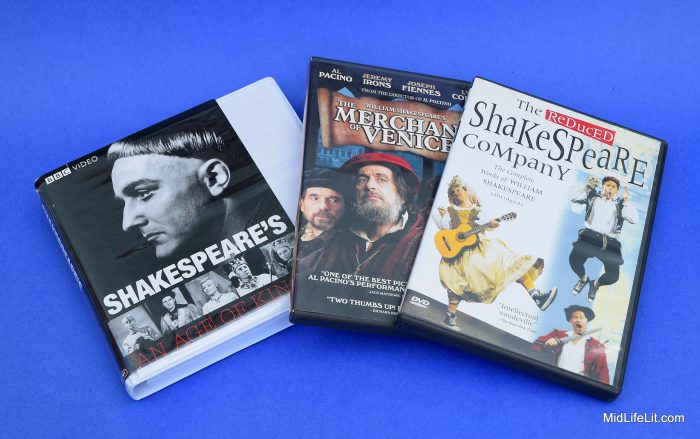 A couple weeks ago, eBay offered a rare site-wide 20% off coupon. So, I shopped for Shakespeare. I was hoping for a Norton Third Edition in four volumes, but instead filled my cart with used DVDs.

I bought The Merchant of Venice, The Complete Works of William Shakespeare (Abridged), and Shakespeare’s An Age of Kings, all for about $20 after the coupon.

I’ve seen this 2004 production of The Merchant of Venice with Al Pacino as Shylock, and feel it’s well worth owning. As I recall, Jeremy Irons is superb in the thankless role of the titular merchant, and the backdrop of ethnic venom is horrifyingly current. It’s also worthwhile for Mackenzie Crook’s kindlier Launcelot Gobbo. I have said in the past that I dislike this play, but it’s grown on me, perhaps because of its increasing social relevance. It’s a dystopian play for dystopian times.

As for The Complete Works of William Shakespeare (Abridged), I saw this show live more than 30 years ago and remember enjoying it. I’ve studied and seen a lot more Shakespeare since then, so it may be even funnier to me now.

Which brings me to the BBC’s landmark 1960 series Shakespeare’s An Age of Kings. This 5-DVD set was on my Amazon wish list for some time, so to find it used for a third the price was a happy score. I’ve come to love the history plays. They combine high stakes, complex relationships, and acute observations of human behavior with a dash of real events. I once watched all the BBC TV Shakespeare history plays in order, an epic experience I’m eager to repeat because it was so rewarding. Age of Kings is nearly as epic, with 15 60-minute episodes, each adapting roughly half of one of the history plays from Richard II to Richard III. It covers nearly 90 years and seven kings (although only five get a full treatment from Shakespeare). I’m partway through Henry IV. So far, although I’m occasionally distracted by the mid-century style of Shakespearean acting, I’m also quite satisfied with the editorial choices.

In all, some great ways to veg out with Shakespeare on a hot summer afternoon!