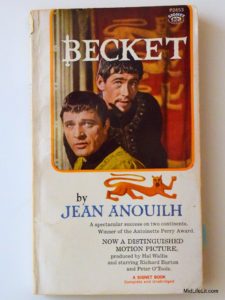 I found this book on the free books shelves at my local library, where they set out books that have languished unwanted at the monthly book fair through several cycles. I’m familiar with the historical Thomas Becket, martyred Archbishop of Canterbury, but had not seen the play or the 1964 movie.

I started with the movie because I think plays are meant to be heard and seen, not read. Richard Burton makes a gravelly, rather posh Becket, and Peter O’Toole a churlish, flighty King Henry II. (O’Toole played a more commanding Henry II four years later, in The Lion in Winter (1968) opposite Katherine Hepburn as Eleanor.)

Becket follows the two men’s intimate friendship in a sort of opposites-attract storyline. The King is royal, Becket is common; The King is frivolous and stupid; Becket is learned and clever; The King is Norman, Becket is Saxon. But they’re also similar. Becket and The King alike are stubborn, high-handed, wealthy, and powerful. They share their carousing, their womanizing, and their apparently chivalric devotion to Gwendolyn. They’re like two bear cubs on a playful tear through a cabin. Things fall apart when The King forces the election of Becket as Archbishop of Canterbury. In that role, Becket suddenly turns as religious as he was secular, which brings him into conflict with The King. Becket flees to France, then returns to take up the cross and face down The King. It ends in tragedy, of course, with Becket’s murder at the altar in Canterbury.

Thing is, as with Shakespeare’s history plays, there’s a fair amount of factual truth running through Becket. Becket was one of Henry II’s most trusted confidantes and advisers. As Chancellor, he was in charge of administering the realm, which in part meant ensuring that everyone paid their proper revenues to the crown. In the role of Henry’s chief administrator, the historical Becket was superb: organized, cool-headed, scrupulous, and relatively fair-minded. One of the less credible accusations later leveled against him was financial malfeasance while Chancellor. Some of the play’s most dramatic scenes are historical realities: Becket did excommunicate several bishops who allied with Henry, Henry’s impulsive outburst did trigger Becket’s murder in Canterbury Cathedral, and Henry did make atonement by being flogged before Becket’s tomb.

Also as with Shakespeare’s history plays, there are ample fictions. Playwright Jean Anouilh acknowledges one himself, in the play’s preface, admitting he knew his original source was considered incorrect by contemporary historians and Becket was thought to be of Norman origin, but he retained the original error for the sake of the story. There was no historical Gwendolyn. The real Becket was 15 years older than King Henry II, and was a rising star toward the end of King Stephen’s reign; none other than the Archbishop of Canterbury recommended Becket to Henry as a candidate for Chancellor.

Henry II gets short shrift in Anouilh’s play and in the 1964 Paramount production. The historical Henry was an astonishingly gifted ruler, conversant in several languages (including English, which he picked up as a young adult after taking the throne), an outstanding general and combatant on the field, a tireless empire builder. He would hunt and ride and fight all day, then engage the top theologians of his time in debate all night. He tapped the best minds in science, philosophy, and the arts for private tutoring, and was famously well-read. He was easily an intellectual match for Becket.

Even shorter shrift is given to Henry’s wife, Eleanor of Aquitaine a real-life political dynamo whom the play reduces to a submissive feminine wisp of smoke. But then, Becket isn’t about Henry and Eleanor (that would be The Lion in Winter). And, to complete the focus on male friendship, Henry’s mother, the Empress Matilda comes off only slightly better. The historical Matilda was Henry I’s designated heir to the throne, who saw her rightful crown usurped by her cousin Stephen; Matilda fought long and hard to have her son Henry succeed Stephen as king, and continued to help him navigate the intricacies of international diplomacy right up to her death. That two of the most capable and accomplished women in human history would be cut down to bit players is easily the play’s biggest fiction.

But, I think you can look too hard at historical inaccuracies in historical dramas. Anouilh makes the focus clear right in the play’s text, which doesn’t even name the royals. King Henry II’s part is simply “The King,” Eleanor’s “The Queen,” and Matilda’s “The Queen Mother.” In Becket, they are mere foils for the title role, who is as rich a character in non-fiction as he is in fiction.