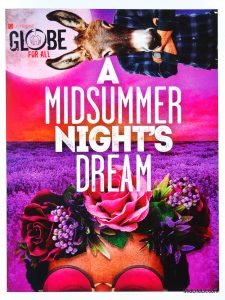 We went to the Central Library downtown to see A Midsummer Night’s Dream, staged by Globe for All. This wonderful program brings Shakespeare’s plays out of the theatre and into the community, with free live productions at resource centers, libraries, schools, and prisons. We’ve been going as a family since the program started five years ago, and word seems to be getting out – we were glad we arrived early to get a place in line because the seating is first-come-first-choose.

Then again, he was familiar with the play and knew it was a fun one. He’d studied it in school a few years ago, and we’d seen A Midsummer Night’s Dream at City College last year. The Globe For All production was almost an exact opposite of that production, with an open stage surrounded by the audience, minimalist staging, and professional actors drawn largely from The Old Globe/USD MFA program.

Globe for All stages its shows so the audience, particularly the first two rows and the children’s seating area on the floor right in front, are very much part of the performance. Characters run through the aisles and rows, engage with audience members, and invite responses. With minimal stage dressing, timely improvisation (staged or not), and lots of audience interaction, Globe for All shows always feel to me like how an actual Elizabethan theatre-going experience might have felt.

Before the performance, the cast and crew went about their business dressed in long-sleeved two-toned work t-shirts emblazoned with “Mechanical” and a faux worker’s union logo for GFA18.

Nine actors played 21 roles, which made for fun doubling and tripling options (Hippolyta/Puck, Demetrius/Snout/Cobweb). Most multiple roles seemed to have enough separation in character and timing (Egeus/Peter Quince, for instance) that it didn’t feel like we were watching a quick-change show. Some were more challenging. Theseus/Bottom, for instance, were well separated right up to the nuptial play, when Theseus escorted Hippolyta to a seat in the audience, slipped away, and Bottom quickly joined the company center-stage. That eliminated the heckling, which I missed, but shifted the focus to the mechanicals and their labors. At the end of their show, Hippolyta delivered the first part of Theseus’ lines, gracefully dismissing the need for an epilogue, before Theseus rejoined her with a straight-faced “what’d I miss?”

We were very glad to have not missed this energetic and fun-filled production. There are several more performances, all free and many open to the public, including the final two performances at The Old Globe Festival Theatre in Balboa Park.