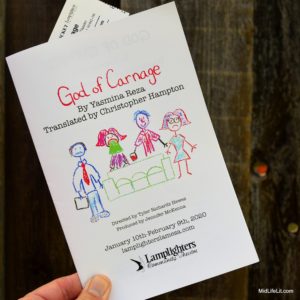 We thoroughly enjoyed God of Carnage at Lamplighters Community Theatre in La Mesa. This is becoming our home theatre because it’s so close, and runs a regular season of excellent plays and musicals.

God of Carnage is a contemporary satire, written in 2006 by French playwright Yasmina Reza and translated by Christopher Hampton. The translated version premiered in London in 2008, and went on to Broadway in 2009. The play we saw at Lamplighters was directed by Tyler Richards Hewes.

The story covers a meeting between two upscale young couples: Veronica and Michael are the parents of a boy who was attacked and injured by Annette and Alan’s boy. As the evening continues, what at first seems like an unprovoked attack emerges as a fight and then retaliation for bullying. And the parents’ initially civil discussions veer off into issues of child-raising, misogyny, and racism while their behaviors spiral downward into petulant lashing out amid changing alliances driven by self-interest.

God of Carnage is a four-person show – the children ostensibly at the center of the discussion are invisible McGuffins – and it’s set entirely in Veronica and Michael’s carefully curated living room. As with the last production we saw here (On Golden Pond), the set, designed this time by Dennis Floyd, played its own role in firmly establishing place, time, and even hinting at divisions to come. I especially liked the use of books as a metaphor for knowledge itself; at first selectively displayed on a coffee table to be noticed and praised, then vomited on, then swept aside. And the actors were all utterly convincing in their suburban insincerity, which made eavesdropping on their arguments – because that’s what watching the play feels like – all the more delicious.

(By the way, sitting in the second row, I was grateful for the choice of clear stage vomit instead of something more, um, colorful, a direction/design choice that kept the stage free of distraction from the hilariously sick stuff going on behaviorally.)

The plot, such as it is, centers on the sustained conflict between the four characters. As a story, it’s one short step from the theatre of the absurd but still close enough to real life to be recognizable and relevant. Imagine Monty Python’s “The Argument Clinic” sketch written by, say, David Mamet. There’s no resolution. No one changes. The situation at the end of the play is much as it was at the beginning. And yet, thanks to layered characters and whip-smart dialogue, it’s immensely entertaining. And, it raises real issues about what we believe, how we behave, and what we believe about how we behave. Apparently there is a genre called the “theatre of bickering,” and if there is such a bucket, God of Carnage falls into it, along with huge chunks of I Love Lucy, entire episodes of One Foot in the Grave, and, come to think of it, everyone’s favorite pieces of Much Ado About Nothing.

In 2011 a movie version was made called Carnage, directed by Roman Polanski. As with On Golden Pond, we’ll probably rent it, because we loved the Lamplighters production so much that we’re hungry to revisit the story with another angle. It’ll be interesting to see what the tools of cinematography bring to it.