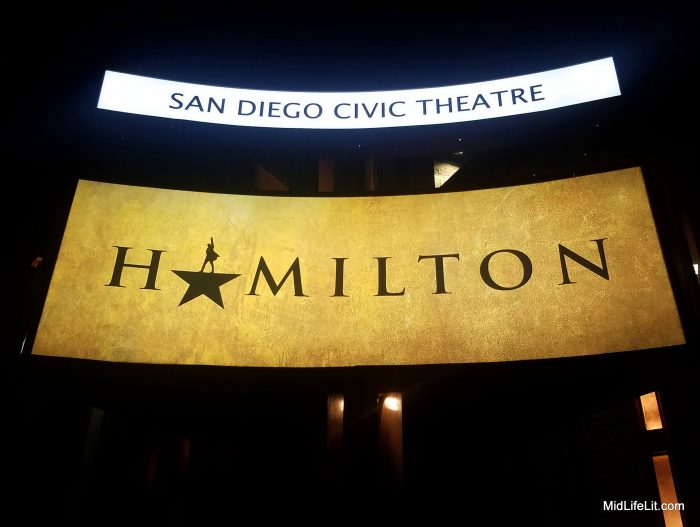 We took the family to see Hamilton, the mega-hit musical about the life and times of one of America’s founding fathers. We have two season tickets to the San Diego Civic Theatre (which we bought specifically to see Hamilton), and we bought two more tickets during the subscriber-only early purchase period. It’s a good thing we got our tickets when we did, because the run was quickly sold out. 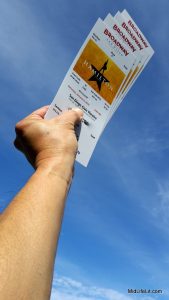 Our season ticket seats are in the mezzanine, and the two additional seats were a few rows from the back wall of the balcony. But here’s an easy way to get front-row views from any unobstructed seat in the house: binoculars!

From where we sat, binoculars were essential given the number of people on stage through most of the show – without them, it would have been very, very hard to tell which one of them was singing. It even might have become hard to identify characters after costume changes.note 1 With binoculars, the view was like being suspended somewhere above the third row of orchestra seats, well forward of the loge. 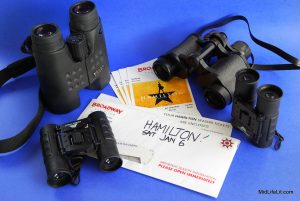 Hamilton is 99% through-sung, like Phantom of the Opera (or, indeed, opera itself). The energy was electrifying from start to finish, and the relentless forward thrust made it feel shorter than its run time. The show has its setpiece villain (a greasily feline Aaron Burr) and setpiece fool (a delightfully megalomaniacal King George III). And, like Shakespeare’s history plays, Hamilton takes egregious liberties with actual events, including what I’d consider the disservice of depicting Hamilton as sitting out much of the Revolutionary War as a writer for General George Washington, when in fact he was a respected combat commander well before Washington rose to power.note 2

It’s all in good fun, though, and there are clever nods to everything from Pirates of Penzance to Macbeth. The historical Hamilton would have known Shakespeare, of course, but not Gilbert & Sullivan.

I also appreciated the bringing to light some of Hamilton’s many flaws. In this era of omnipresent media, today’s leaders seem to fall far short of the bar set by our idolized (and idealized) forefathers. It reminded me that men of power, at least, haven’t changed much.

Finally, I loved the bringing to life an era of vast possibility. It was truly a New World. The sheer, manic optimism that created this nation is beyond comprehension.note 3 Yet, possibilities still exist to remake the nation anew. If Hamilton turns just one more high school student into a historian or political leader, that’s a great result. As an aside, my older son, a high school senior and an early Hamilton devotee, insists that his A in history was due more to to Hamilton and Abraham Lincoln, Vampire Hunter than anything else. So there you go.

Which neatly brings me to my bigger point: Nations are built on mythology, not history. By creating a uniquely American history play, Lin-Manuel Miranda has woven himself into the very fabric of the United States, past, present, and future. His mythological Alexander Hamilton co-exists with the historical Alexander Hamilton in the same uneasy way Shakespeare’s heroic Henry V co-exists with the historical, and much less-likeable, Henry V. In both cases, one is a living work of fiction, the other is a dead rich white guy from the ruling elite.

And therein lies the rub. We’re still basically telling the story of the American white elite. By contrast, the musical Allegiance told the story of ordinary American families of Japanese descent who were rounded up en masse and shipped off to remote camps during World War II.note 4 My family had the privilege of seeing its world premiere at The Old Globe in San Diego in 2012; it reached Broadway three years later. Yet, despite the backing and presence of charismatic TV/movie/meme star George Takei, the show received mixed reviews and closed after its initial four-month run. Other recent plays about the historical experiences of American minorities, such as Alfredo Ramos’ The Last Angry Brown Hat, about Chicano political awakening in the 1960s and ’70s, just haven’t gotten the mass traction.

Here’s a case in point: Miranda’s previous award-winning musical, In the Heights, is set in modern-day New York City, in a predominately Hispanic-American neighborhood. But it relies on a deus ex machina in the form of a winning lottery ticket to bring its story to a happy ending. The idea that anyone can get lucky is apparently more salable than the idea that ethnic minorities can get ahead through their own intelligence, talent, and drive.

Here’s another case in point: in Hamilton, the line “Immigrants – we get the job done” is met with “applause and cheers every single night.”note 5 It’s arguably the play’s Big Idea. Yet, it appears nowhere on the licensed merchandise. You can buy “My shot” mugs, A. Ham and A. Burr baseball caps, and logo sweatshirts. But the commercial side doesn’t follow the script. Instead it reveals the truth about America today: people may applaud the sentiment, but they won’t bring it into their homes and they won’t wear it in public.note 6

In 1927, Jerome Kerr and Oscar Hammerstein II delivered a breakthough message about racial prejudice through Show Boat, a frilly song-and-dance musical set during the post-Civil War Reconstruction era. 31 years later, Lorraine Hansberry’s A Raisin in the Sun showed a generation of theater-goers a slice of the mid-century urban Black American experience, confronting issues of ethnic identity and entrenched socioeconomic racism. Today, in Hamilton, perhaps color-blind casting and a few verbal zingers represent the limit of what can become a mega-hit American history play.

So, like all good history plays, Hamilton shows us how far we’ve come. And how far we still have to go.


1. This is where I appreciate William Shakespeare’s audience-friendly craftsmanship in writing. Generally, his characters continue to be identified by name throughout the play. That really helps keep things straight. Go back up

2. The artillery company Alexander Hamilton raised – or, more accurately, stole from the British in a daring raid – in the summer of 1775 and commanded through 1776 evolved into the 1st Battalion, 5th Field Artillery Regiment. It is still in active service. We make a big deal of George Washington crossing the Delaware River to attack a German garrison attached to the British at Trenton on Christmas Day 1776, but Hamilton was also there, sick as a dog but right up at the front, personally managing his big guns to support the assault and wreck the Crown forces’ counterattack. Go back up

3. Two excellent books that capture the exuberance of our founders and their outrageous vision are Founding Brothers by Joseph J. Ellis and The Day the American Revolution Began by William H. Hallahan. Go back up

4. My grandfather was a Japanese-American businessman and entrepreneur who through the 1930s created the largest wholesale nursery in the West. As a result of his proven executive ability, he was among the first rounded up at gunpoint soon after Pearl Harbor, along with other civic leaders; his family was later relocated to Poston Camp I, where he later joined them. My mother spent her high school years in crude, shared barracks surrounded by barbed wire, gun towers, and armed soldiers. My father, too, was imprisoned as a high schooler; his family was sent to Heart Mountain in Montana. So, yeah, more than a bit of a connection there. That said, the American Revolution is a more universal theme than the experience of American ethnic minorities, and the team that wrote Allegiance, while incredibly talented, were no Lin-Manuel Miranda – who else is? Go back up

5. Rory O’Malley (who played King George III), quoted in “At Long Last, ‘Hamilton’: Megahit Musical Lands in San Diego This Weekend” by James Hebert, San Diego Union-Tribune, 3 Jan. 2018, Night+Day section, pp. 6–8. O’Malley went on to say that this line, and the audience’s consistent reaction to it, was his favorite part of the play. Go back up

6. I’ve fairly recently got up the guts to use my Executive Order 9066 canvas shopping bag from the Japanese American National Museum when I go to the grocery store. Only one person has ever commented on it, but it has gotten a few long looks. I would gladly wear an “Immigrant 3G – Still getting the job done” t-shirt, although I’m afraid it would also remind me that, compared to my grandfather, I’m something of a slacker. Go back up