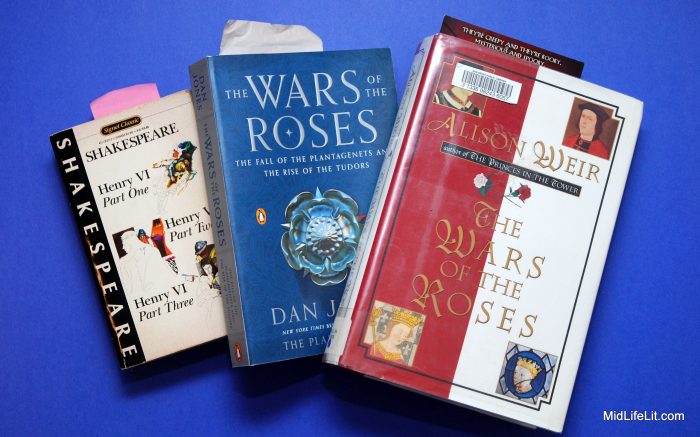 How many people, I wonder, become interested in history through history plays, films, novels, or TV shows?

My older son, who was an avid Hamilton fan years before the show came to town, credits his A in high school U.S. History to the Hamilton soundtrack and the novel Abraham Lincoln, Vampire Hunter. So pop culture versions of history definitely carry academic weight, even if one unfortunate side effect may be to believe that Abraham Lincoln lives on as a vampire and that Alexander Hamilton was a democrat.

My own gateway to the past was Chaucer’s The Canterbury Tales, which led to a lifelong interest in medieval history – the socioeconomic medieval, as opposed to romantic medieval (e.g. Disney fairy tales or Medieval Times dinner theater) or political medieval (e.g. Lord of the Rings or Game of Thrones).

But the political gateway was there, in the form of Shakespeare’s Richard III which I ate up in any iteration over the decades. The thing that fairly recently pushed me over the theshhold was watching BBC-TV’s 1981-2 productions of Henry VI Part 1, Henry VI Part 2, Henry VI Part 3, and Richard III. Directed by Jane Howell, they’re a dystopian sequence of plays set on an ever more-ruined stage.note 1 Suddenly, the connection became clear between the socioeconomic and the political, between the story and the history. I promptly immersed myself in everything I could find about medieval history, starting with Dan Jones and Helen Castor, then moving on to scholarly articles, studies, and theses. Natalie Grueninger’s website On The Tudor Trail turned me onto Alison Weir, a novelist-cum-historian whose Tudor-oriented view of the Wars of the Roses complements Jones’ more Plantagenet-oriented view of events.

And threading through the whole era are Shakespeare’s history plays, stretching back to King John, then skipping ahead to sweep continuously from Edward IIInote 2 to Richard III before jumping to Henry VIII. Even considered as a biased, romanticized view of history conceived as mass entertainment, and acknowledging the compression of time (which even Shakespeare acknowledgesnote 3) and outright invention, it’s often amazing how accurately the plays parallel – and are informed by – actual historical events. I think an understanding of history helps make better sense of the history plays.

That puts me in opposition to those who argue that historical knowledge is of little use in portraying a character in a history play, and there are many eminent Shakespeareans who do. Surely a historically accurate documentary approach would have done little to help Hamilton become a cross-cultural box office smash.note 4

However, I think it improves the fictional Richard II if the portrayal is based on a king who, as a boy of 14, single-handedly outfaced an organized army of peasants. I think the villain in the minor Henriad (or, as I call it, the Margaret tetralogy) is clearly the pious, weak Henry VI, an opinion on the king with which many historians would agree. And, I think it increases the drama to know that the Duke of York’s claim to the crown followed established rules of primogeniture, and isn’t just an attack out of the blue by an arrogant wanna-be backed by a junta of henchmen.

Even non-history plays gain depth from historical context. For instance, in Macbeth, I think it adds a layer of moral complexity to consider that automatic hereditary kingship wasn’t standard operating procedure in Scotland when Duncan named his son heir to the throne.

Importantly, I don’t think this works in the other direction. Shakespeare’s history plays are nothing remotely close to being a primary or even secondary source for medieval research. However, I do think Shakespeare’s history plays have historical value because they mark the spot at which Elizabethan and Jacobean audiences would have understood – and been led to understand – their national mythology. As early modern documentation goes, actually, I think they are primary sources, all the more so because they were ginned up for public consumption.note 5

So, between history and history plays, I come down firmly on both sides.

1. This was done again recently in a three-part Hollow Crown series that, despite big budget visuals, utterly failed to live up to the bar set by the earlier, meatier, films. Go back up

2. People who know more about such things than I increasingly attribute the formerly anonymous Elizabethan-era play Edward III to a collaboration between Shakespeare and Thomas Kyd. One could push the series of history plays one king further with Christopher Marlowe’s Edward II. Go back up

4. And yet … I must say that some of the most dramatic revelations in Hamilton were fundamentally truths well told (to quote advertising giant Harry McCann), such as the Reynolds affair. But I digress. Go back up

5. I’ve always believed that advertising archives are the most-accurate source of primary information about historical public perceptions and social norms, because they reflect, not some academic wishful thinking or politically biased report, but what was actually present as a widespread, culturally embedded, commercially viable belief. Go back up