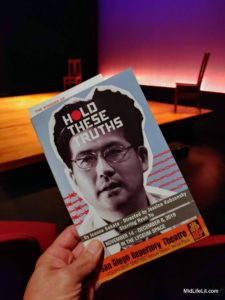 My whole family, including my mother and mother-in-law, went to see the San Diego Rep’s presentation of Hold These Truths at the Lyceum Theatre, at what used to be Horton Plaza downtown. The last time we all saw a play together, it was Allegiance at its world premiere at The Old Globe.

The show, about Japanese American internment resister/protester Gordon Hirabayashi, was superb. Actor/playwright Jeanne Sakata wrote the play, a one-man show performed by RADA-trained Ryun Yu. It took place on a bare stage with just three wooden chairs, and with minimal props (a couple pairs of glasses, a cardigan, a suit jacket, a tie) but immersive lighting and sound.

Yu, however, positively fills the stage, populating it with countless characters beyond Hirabayashi, from parents and college buddies to county sheriffs and U.S. Supreme Court justices.

The story of Hold These Truths follows Hirabayashi’s life in hops: his childhood on a farm in Washington state, his college years, the attack on Pearl Harbor, Order 9066, and the forced internment of American citizens of Japanese descent. Hirabayashi, filled with collegiate idealism, reluctantly resisted orders he believed to be unconstitutional. While his family was shipped off to an interment camp, he was sent to prison for an ethnically targeted curfew violation (he was studying with fellow students); in the prevailing atmosphere of race hatred even the ACLU abandoned him. The U.S. Supreme Court eventually decided that restricting and questioning individual citizens based on their race was in fact constitutional, as was the internment of law-abiding Americans based solely on their ethnic background.* After the beginning of the release of families back into normal society, the play skips ahead: Hirabayashi’s release from prison having served his sentence, marriage, return to school, professorship, and retirement. In 1987, the U.S. Ninth Circuit Court of Appeals, based on new evidence, overturned his criminal conviction, vindicating him at last.

A San Diego connection: it was a UCSD political science professor, Peter Irons, who discovered a cache of previously suppressed documents that showed government misconduct, including the U.S. military’s opinion at the time that the whole internment program was not a military necessity.

The real Gordon Hirabayashi died of complications from Alzheimer’s Disease before the play was finished, so he never got to see it performed. But playwright Sakata met with him numerous times, and her play captured the essence of a highly principled American hero who was not without a delightful sense of humor and warmth.

My 92-year-old mother was just 13 when she and her family were sent to Poston (Camp 1), a whole generation younger than Hirabayashi, who was a college junior at the time. Because her father was a successful businessman, he was among the first to be rounded up at gunpoint and sent to a separate facility. She said Hold These Truths really captured the time and the feelings of the experience, the sense of helplessness and injustice.

After the show, we looked at the exhibit about the internment camps. Some of the photos were of Poston, and as my Mom started to share her own memories a small crowd gathered to hear her speak.

But, she’s 92 years old. As the number of people with living memories of internment shrinks, the risk of repeating a gross injustice grows. That’s why plays like Hold These Truths and Allegiance – and other ethnic American history plays, like the works of August Wilson (Jitney is coming soon!), or John Leguizamo’s Latin History for Morons – are so important: they bring the past to the present for a more enlightened future.

* These decisions have not been overturned or voided, and still stand today. They have, in fact, been recently quoted as legal precedents for questioning, detaining, and incarcerating other groups based on ethnicity. However, in 2018 Chief Justice John Roberts wrote, regarding Korematsu v United States, a case about internment based on racial heritage: “Korematsu was gravely wrong the day it was decided, has been overruled in the court of history, and – to be clear – has no place in law under the Constitution. . . . The forcible relocation of U.S. citizens to concentration camps, solely and explicitly on the basis of race, is objectively unlawful and outside the scope of Presidential authority.”