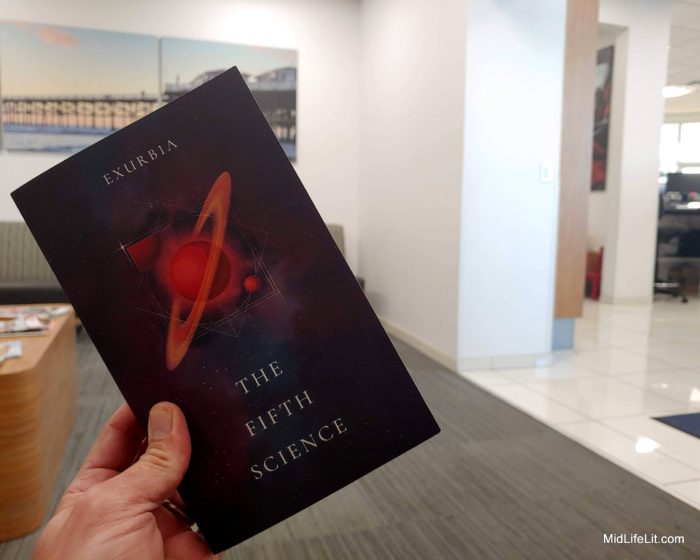 The other morning I had an appointment for routine service on my car. However, in the rush to get everyone out the door I’d forgotten to pack a book or anything to work on while I waited. My high schooler, though, had a spare book in his backpack and kindly lent it to me. It’s The Fifth Science, a collection of loosely connected short stories by a writer called Exurb1a. I started it in the waiting area, and had to finish it that day.

Exurb1a is one of my son’s favorite authors right now. In addition to several books, Exurb1a has created two YouTube channels with essays, stories, and musings on (among other things) physics, philosophy, time, and the nature of consciousness. This book’s short stories encompass all those elements, focusing on the last one. It could also be read as a novel, with the stories brief stops along a journey that extends to the end of humankind.

A few stories feel slightly derivative, with flashes of old Twilight Zone or Doctor Who episodes (or even O. Henry, Albert Camus, and Isaac Asimov’s Foundation) blinking vaguely in the background. But that’s good company. And, as a whole, The Fifth Science is excellent, original and thoughtfully written in a way that makes me feel upbeat about the state of writing today.

I particularly enjoyed the idea of an artificial intelligence quoting – and turning into a taunt– Hamlet’s “What a piece of work is man” soliloquy. And, as with all good writers, I felt at times that Exurb1a was talking directly to me. In “The Want Machine,” he writes “Inaction is the primary refuge of those who prefer their own constructed realities to the beautiful chaos of the real world.” (p. 135) Yeah, that’s why I’m now, well past middle age, thinking of turning to academia in pursuit of what is likely to be a phantasm.

Like many Westerners (and that may be an assumption too far), when Exurb1a creates a fictional belief system he lands on something very much like Taoism or Zen. Here’s a piece of “Kala:”

“All explanations are an attempt by humankind to divide itself from the world. Any explanation without including the explainer is as a tree without the trunk. One is inseparable from the other. No system of knowledge can avoid this limitation. Numbers are not the true measure. Words are not the true description of things. The world is the explanation.” (“The Girl and the Pit,” p. 189.)

What I liked, was that the stories in The Fifth Science, while falling roughly into the dystopian category, have an overarching sense of wonder and hope. On the one hand, the author repeatedly says “History is a drunk magician.” On the other, he says “… you don’t convince the living to behave in a proper way, you just wait for them to die and hope their children grow up a little kinder and wiser than their parents.” (“Lullaby for the Empire,” p. 306.) There’s a little Zen story that amounts to essentially the same thing, and nothing could be more hopeful than the idea that our kids will be better people than we are.

Looking back, though, I’m pretty sure that I am neither kinder nor wiser than my own parents. I fear my generation – or perhaps it’s just me – marks a regression of sorts, a reversion to the individual, the tribal, the primitive. But, returning to looking forward, that’s not the point; the point is the hope that as creatures we will grow more compassionate, more thoughtful, more secure.

The more I think about it, the more I want to re-read and highlight certain stories and passages. That’s the mark of a really good book. I had to fight hard to resist writing notes in the margins because it wasn’t my book; it was borrowed. Dang. I may have to buy my own copy, because it really is good enough to have in the house twice.