I took the family to see Twelfth Night at The Old Globe a few weeks ago. The show wasn’t part of the regular season; it was a special run presented as part of the Shiley Graduate Theatre Program at USD in partnership with The Old Globe. These shows are performed in the White Theatre, so they’re presented in the round, which is often a challenge. I’ve noticed that the plays selected for the Globe for All free series show up a couple years later either in this series or the regular season. (Here’s what I thought of the Globe for All version of Twelfth Night in 2017.) However, the shows have been very different, which is great because you get two different interpretations of the same play in a fairly short span of time. 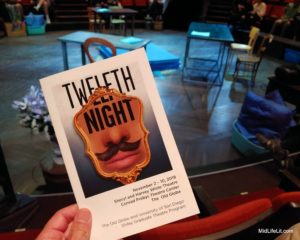 This version of Twelfth Night was one of the best I’ve seen. I was especially happy director Jesse Perez and dramaturg Abraham Stoll let Feste and Malvolio develop as fully rounded characters, not caricatures. In the scene in which Malvolio upbraided Sir Toby Belch and Sir Andrew Aguecheek for their riotous late night/early morning carousing (2.3), Malvolio was clearly much more sinned against than sinning, and their revenge far more cruel than remotely justified. Even Sir Toby and Sir Andrew were fully realized and more than mere slapstick sidenotes. In a pivotal fight scene, Sir Toby acquited himself well against Sebastian, despite being armed only with a cane.

The decision to cast very different-looking actors as Sebastian and Viola made their doubling act confusing to those unfamiliar with the play. After I reminded my teenager that a central plot conceit was that Viola and Sebastian looked so much alike that one could double for the other, the story made much more sense to him.

Overheard in the restroom during the intermission: “I don’t like when they change genders around.” Mmm hmm. That critic may have been referring to Duke Orsino being played by a woman (who, by the way, made one of the more believable Duke Orsinos I’ve seen). But, um, changing genders around is kind of the point of the play. I wonder what he’d have made of an Elizabethan production, in which Viola was played by a young man? A man playing a woman playing a man might’ve overwhelmed him.

And the ending scene was absolutely, heartbreakingly, perfect: a stage bereft of everyone and everything save a bare-bulb lamp, Feste singing, Fabian listening – and Malvolio silently entered, lingered as if in thought, then removed his steward’s chain and hung it on the lamp before silently walking into the darkness. For what happened to him, there is no recompense, no happy ending.

This production joins the Trevor Nunn film (1996, with Imogen Stubbs as Viola, Helena Bonham Carter as Olivia, Ben Kingsley as Feste, and Nigel Hawthorne as Malvolio) and the Paul Kafno/Kenneth Branagh TV film (1988, with Frances Barber as Viola, Caroline Langrishe as Olivia, Anton Lesser as Fese, and Richard Briers as Malvolio) as one of my favorites. The Nunn version is lavish and at times whimsical, but with an almost malevolent Feste; the Branagh version is dark and bittersweet; I think this live show struck the best balance.

Then, a bit later, we saw On Golden Pond, the 1979 play by Ernest Lehman, at Lamplighters Community Theatre in La Mesa. It was exquisitely performed by some truly world-class local actors. The set design by O.P. Hadlock really transported you to a lakeside cabin in Maine, feeling instantly cozy and familiar. And the lighting and sound by Samantha Hendricks gently but firmly conveyed the passing of five months’ time in a New England summer home. This was our first show at Lamplighters, and we were thrilled to find such a high-quality production so close to home. We’ll probably buy the mini-pack for the remaining shows.

A few days later I couldn’t resist watching the movie On Golden Pond, also written by Ernest Lehman, starring Henry Fonda, Katharine Hepburn, and Jane Fonda. Despite being the movie and the play being roughly the same runtime, the movie takes advantage of cinematic language to add events, like the boat crash, and expand on character development, especially in Norman’s relationship with the boy Billy Ray. It also closes the loop on Chelsea’s story, in particular repairing her strained relationship with Norman. Whether you see it live or on film, it’s a great story. Much like Twelfth Night.