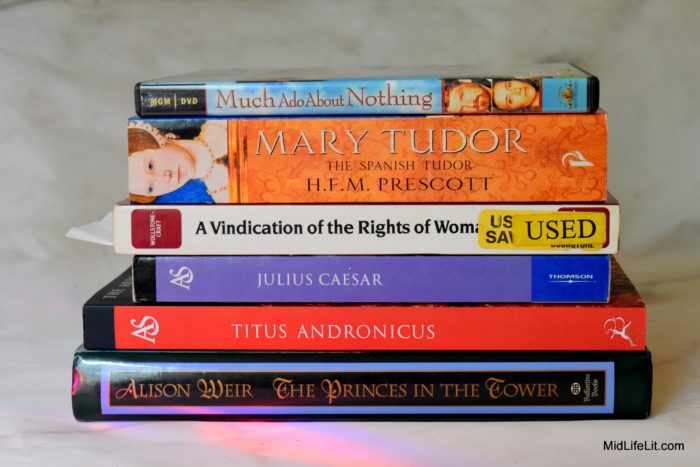 I was looking to kill time after a dinner out with my teenager, waiting for traffic to die down, and as we were sort of in the neighborhood I suggested we go to BookOff. It’s a large store packed with used books, DVDs, electronic goods, and Japanese toys. It’s one of our favorite places to pass the time, albeit fiscally dangerous because I always find many irresistible bargains.

My first stop was the $1.50 DVD section, where hundreds of great movies are available for less than the price of a streaming rental. I snagged the Kenneth Branagh Much Ado About Nothing despite already owning it on a streaming service. Sometimes, you need to cut the wifi, or the wifi is down, or you’re somewhere with little or no wifi signal. And, I can always watch Shakespeare. And, although I prefer Joss Whedon’s version (which I also own), Branagh’s is perfectly serviceable if much fluffier.

My next stop was the $1 bargain books shelves, of which there are multi 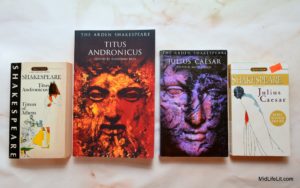 ple aisles. I never pass up a chance to add to my growing collection of Arden Shakespeares; this time I found Titus Andronicus and Julius Caesar, the Andronicus edited by the dependably wonderful Jonathan Bate. I already own both plays in the superb Signet Classic editions, but I think it’s worth having multiple good editions for the different scholarly perspectives. Especially at a buck apiece.

Finally, there’s Mary Wollstonecraft’s vibrant A Vindication of the Rights of Woman, sadly, as timely and relevant now as it was 200 years ago. Let your finger fall on any page at random, and you could be reading an essay written today. Here’s a snip from page 57: “I lament that women are systematically degraded by receiving the trivial attentions, which men think it manly to pay to the sex, when, in fact, they are insultingly supporting their own superiority.”

Nearby, I found a biography of Mary Tudor by H.F.M. Prescott. Since I’m now a pin-carrying member of The Tudor Society, I thought I should brush up on one of the more overlooked English monarchs. Mary was, after all, the first fully acknowledged female ruler of England, an event that gets overshadowed by her successor Elizabeth’s long reign. It fits well with Mary Wollstonecraft; I rather think the two Marys would have gotten along famously. Hmm, that could be a play: The Two Marys. Someone should write it. Ooo, ooo, The Three Marys and include Wollstonecraft’s daughter, Mary Shelley.

I carry always a list of books I want. My list includes those of Shakespeare’s plays that I either lack or own in inferior editions, but also includes other works. Alison Weir’s The Princes in the Tower was on the list, and I was thrilled to find a lovely hardcover copy for $5. Now that I’ve crossed it off my list, I’ve added another: the Dorothy L. Sayers translation of The Song of Roland.

So, five books and a DVD; three Shakespeare, two history, one social commentary; all for $11.31. Not a bad score for the evening!

A postscript: Among the books I fondled, skimmed, carried for a bit, read some more, and reluctantly returned to the shelves was Shakespeare’s Kings by John Julius Norwich. It 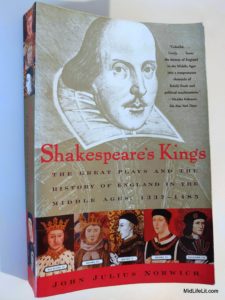 was, frustratingly, the book I’d fantasized about writing, were I an academic historian/Shakespearean with access to archival medieval documents (a fantasy that necessarily also includes fluency in Latin and Old French). Shakespeare’s Kings compares and contrasts the kings in Shakespeare’s history plays with the historical kings. I put it back on the shelves because of price, plus I felt I’d spent enough already, but it nagged at me that I’d left it behind. So after sleeping on it I turned to Amazon and found a good used copy that was priced not only considerably cheaper, but almost exactly the sum of what was left on an old rebate e-card. A few days later, here it is.