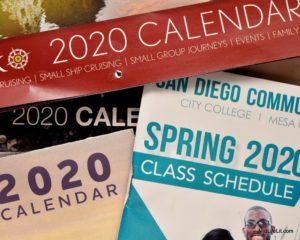 In 2019 I saw 12 live plays, which is more than I thought I would see. Three were for a college class, but two of those I’d have wanted to see anyways. We got season tickets to the Stagehouse Theatre at Grossmont College, an affordable way to see live shows, and late in the year we discovered Pickwick Players and Lamplighters Community Theatre, local groups that each put on a full season of plays and musicals.

In 2020 we’ll probably buy season tickets to Grossmont College again, plus we bought a mini-pack for the remaining three shows at Lamplighters. And, we have tickets for August Wilson’s Jitney at the Old Globe. We also want to see Come From Away when it arrives, and I want to see both of the shows in The Old Globe’s summer Shakespeare series. Plus, there’s usually one free Shakespeare play at Coronado Playhouse and another through the Globe for All program. There’s lots to see, and lots that we’ll be seeing!

In 2019 I took three 100-level online college credit classes through the San Diego Community College District: Study of Filmed Plays, Cinema as Art and Communication 1 (to 1970), and Cinema as Art and Communication 2 (1970 to present). I had hoped to learn things useful in a master’s degree program in Shakespeare Studies, because filmed versions of his plays reach far more people than any live production can. The classes were excellent, and filled significant gaps in my knowledge. Also, I wanted to update my 35-year-old academic transcript with recent coursework. And, I hoped to get my professors to agree to be references for as-yet-hypothetical graduate program applications, which I achieved, three for three. Mission accomplished on all three fronts: learning, 12 new units with a GPA of 4.0, and references.

Entering the new year, I almost signed up for more community college classes (in Anthropology) because there are so many interesting things to learn. But recreational learning is endless, and being a perpetual community college student is not part of my vision for the future. So I didn’t.

Instead, for 2020 I’m focusing on applying to a Shakespeare-related master’s degree program. But, there’s a catch, and here’s where the view ahead gets hazy.

I’d developed the idea, or fantasy really, that with such a master’s degree I could teach Shakespeare part-time at local community colleges. The dream was detailed enough to imagine biking to the two closest campuses. I thought that would be rewarding and fun and a way to slowly earn back the cost of the degree. Two things made me rethink that entire notion.

First was a dive into community college hiring requirements, which make clear the district wants generalists: a master’s degree in (exactly) English, Literature, or Composition. That knocked the wind out of my sails, but there is a process to apply for equivalency so all is not lost.

The second, bigger blow to the dream, was a frank discussion with my nephew over the holidays. He’s a creative writing adjunct professor at various colleges. I had to confront the reality that new adjuncts get hired to teach subjects like Freshman Reading and Writing, not specialized subjects. And the sections adjuncts teach are at the worst hours, typically at night.

I considered a more-general MA in Literature, which fits the hiring requirements for adjunct professorial work and could still be fun. But the thought doesn’t fill me with excitement the way the thought of studying Shakespeare does. Neither does the idea of a part-time job running all over town teaching English 101. So that little fantasy may be out.

Which leaves the problem of justifying the expense of a master’s degree, if not for the employment potential.

I’m still puzzling out the answer, but it may lie in online private education. For instance, I’ve thought about creating a literature course on the Udemy platform, because there aren’t many of them and it could be a way to make a little money. My having a master’s degree could help sell the course.

Last year I mentioned thinking of starting a YouTube channel. But, after trying my hand at video editing, I decided it’s not something I especially enjoy. As a means to an end, though, if I could create a short online Udemy course, that would be a significant accomplishment in the new year.

On another note, the discovery of two community theatre groups just a few miles away got me thinking that volunteering with them could be a way to be productive. It’d be fun to learn the ropes and be involved in putting on shows, and I could inch toward helping stage some Shakespeare. Such work would be unpaid, but strikes me as richly rewarding in so many other ways.

In the same vein, the San Diego Shakespeare Society holds regularly scheduled facilitated readings of Shakespeare’s plays all over the county. Most are inconveniently far away, but it would only be two evenings a month and it might be fun, as with the theatre, to get involved in helping out with an eye toward eventually coordinating readings closer to home.

Those two activities point toward staging instead of teaching as a long-term goal. Like a master’s degree, performance-related experience could add credibility to an instructor bio on an online course. The experience could also enhance a grad school application, and in turn, a Shakespeare-related master’s degree could prove relevant in the work. And, who knows what paid opportunities will come up once I put myself out there and get involved?

So that’s my 2020 vision: volunteering, creating an online course, and possibly applying for a master’s degree program. Stay tuned, though, because things are definitely fuzzy!