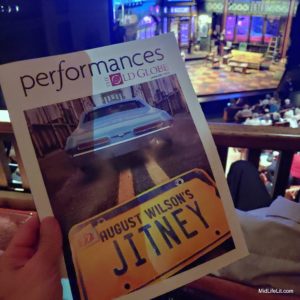 I was introduced to August Wilson by a Study of Filmed Played class at San Diego City College, in which we watched Fences, the film with Denzel Washington and Viola Davis. Fences, set in the late 1950s, is part of Wilson’s ten-play Pittsburgh Cycle or Century Cycle, a panorama of African American urban life from the 1900s to the 1990s. Fences is followed by Two Trains Running, and then Jitney, set in 1977. When I heard the touring production of Jitney was coming to The Old Globe, I had to try to see it.

Tl;dr: Jitney was amazing, with gut-tickling, gut-wrenching performances from a cast that includes actors from the Broadway production. If I could see it again I would, if only for the masterful scene in which Becker (Steven Anthony Jones) encounters his son Booster (Francois Battiste) for the first time since Booster’s conviction and imprisonment for murder. It is an entire Shakespearean tragedy in a single scene, and it is magnificent.

The story follows a small group of drivers at a ramshackle jitney station in the Hill District in Pittsburgh. Regular taxicab companies refused to travel into the predominately African American neighborhood, so to get around local residents relied on jitneys, unlicensed local cabs, like Uber or Lyft today. Not-much-of-a-spoiler: the plot includes a love story, conflicts, a deadline, and an unexpected death.

But to reduce the story to those focal points is to reduce, say, Romeo and Juliet to pretty much the same elements. It’s the journey we take from point to point, and with whom we take it, that makes the difference, and August Wilson populates the jitney station with instantly recognizable individuals, held together by the station owner, Becker.

San Diego Union Tribune theatre critic James Hebert called August Wilson “as close to an American Bard as we’ve come so far,” and in an interview on NPR the actors evoked the same sentiment about Wilson’s glorious use of language. Wilson was a poet turned playwright, and he imbued every line of dialogue with the same sensitivity. Wilson’s dialogue is poetic, but not in a Shakespeare way, and it’s realistic, but not in a David Mamet way; it’s realistic in that it conveys the thoughts and feelings of real people, articulated better than those people would ever do in real life. 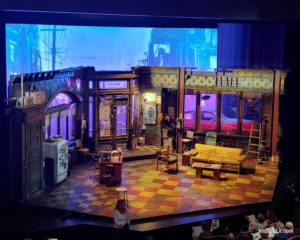 The jitney station set, designed by David Gallo, was perfect in its dilapidated glory. Our seats were up in the balcony, where we could take in the whole stage as events unfolded. Like the dialogue, there was art in the details: “Becker’s Rules” pinned to the wall, a refrigerator door taped over and over with layers of aging pictures and notices, and evidence of the station’s many former lives in faded lettering on the doors and disjointed phases of colored tile on the floor.

Although Jitney explores a small slice of the African American experience, I think it shouldn’t be seen as just an ethnic play. And there we run headlong into a very current issue of ethnicity and art, and the extent to which one not only informs but also authorizes the other. Currently in the hot seat is author Jeanine Cummins, who wrote a novel called American Dirt. It was well-reviewed, even broadly lauded, until some critics accused Cummins, who is white, of cultural appropriation in her work of fiction. The protest caught fire on social media, generating mass outrage. (Never mind that Harriet Beecher Stowe, a white, Northern novelist, in Uncle Tom’s Cabin created a vision of the African American experience in the South and galvanized a nation into opposition to slavery; that was then and this is now.) Although a dialogue about cross-cultural influences in works of art is important, the effective silencing of an author is not a positive outcome for anyone, really.

August Wilson would likely have agreed that artists of all ethnicities should stay in their lanes. Certainly, Jitney could not have been written – convincingly, anyways – by anyone other than a resident of the Hill District in Pittsburgh, PA. But it also took a writer of considerable talent to breathe life into it. Jitney, like Hold These Truths, Allegiance, Zoot Suit, and so many other works, speaks to all America, and in an all-American voice.