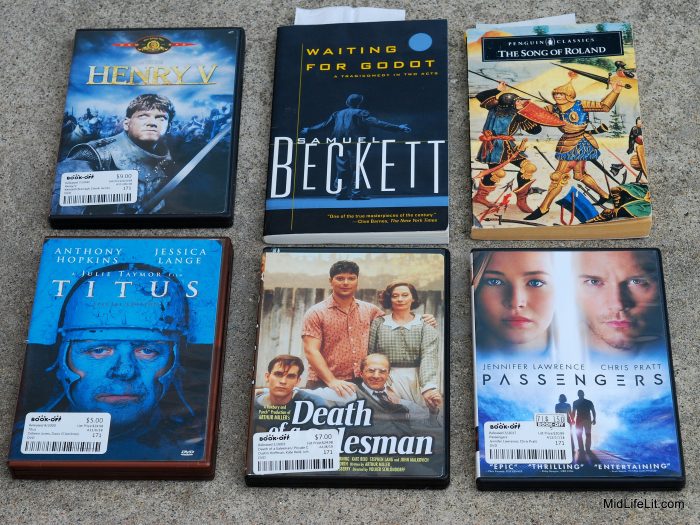 I’m enrolled in an online Study of Filmed Plays class coming up this Spring at City College. It’s a for-credit course, and it’s the first real college class I’ve taken since, well, college, so I’m swotting up beforehand. Required books include Rosencrantz & Guildenstern Are Dead and The Glass Menagerie. I have a copy of Stoppard’s play, but not Williams’, so I headed to Book-Off in Kearny Mesa to see if I could pick up a used copy cheap, preferably off the $1 shelves.

The only copy of The Glass Menagerie in stock cost pennies less than the recommended edition, so I passed. But, I found lots of other books for a buck: Sherwood Anderson’s Winesburg, Ohio, John Webster’s The Duchess of Malfi, Eugene O’Neill’s Long Days Journey Into Night and The Iceman Cometh. I fought hard, though, and came home with only The Song of Roland (in good used condition for its age) and Samuel Beckett’s Waiting for Godot (seemingly untouched). I thought this Roland was the same edition I’d used in college, but it can’t be because it was published in 1990. Waiting for Godot is one of those rare plays that’s almost as good in print as on stage, perhaps precisely because nothing happens while everything happens.

My resistance, though, crumbled in the DVD section. I was looking, again, for The Glass Menagerie, preferably the version directed by Paul Newman and starring John Malkovich, Joanna Woodward, and Karen Allen. I found, instead, Death of a Salesman, Henry V, and Titus. I also found The Taming of the Shrew with Elizabeth Taylor and Richard Burton, but put it back. Passengers was a find on the $1.50 racks; it’s a good movie that we’ll watch once then donate or sell back.

I haven’t seen Titus Andronicus on-stage or on-screen. This contemporary, anachronistic version is directed by Julie Taymor and stars Anthony Hopkins and Jessica Lange. Unlike most filmed versions of Shakespeare’s plays, it apparently contains most of the original text. I’m really looking forward to watching it even as I kind of dread watching it. Julie Taymor, like Gregory Doran, can at times be brilliantly unwatchable.

I’d borrowed Kenneth Branagh’s Henry V from the library, and pieces are available on YouTube, but it was worth $9 – my priciest purchase – to own it. In contrast to Taymor, Branagh tends toward comfortably conservative productions. Still, I remember particularly enjoying Richard Briers’ more-agile Bardolph, which made his downfall more tragic. I also enjoyed seeing The Old Globe associate artist Richard Easton as the Constable of France.

This version of Death of a Salesman stars Dustin Hoffman, Kate Reid, John Malkovich, and Stephen Lang. Hoffman’s Willy Loman is a lighter, quicker-footed character than Lee J. Cobb’s (a version I’d also love to own), his desperation more frantic, like a small animal trapped in a jar. Although the setting is fixed in the 1950s, the production feels less like a period piece; Hoffman’s Willy Loman seems very much a beleaguered everyman for today.

Hmm. Considering my mission was to get The Glass Menagerie, this trip was a failure. But, with these awesome DVDs to watch and books to read, it doesn’t feel that way.