In the bright and fearless days before COVID-19 shut everything down, I considered watching my first real opera. I thought I’d first try one of Verdi’s operas based on a Shakespeare play, Macbeth or Otello or Falstaff, most of which were available on DVD through the city library.

Then the shut-down happened, the libraries closed, and the Metropolitan Opera in New York City started streaming one opera a day from their HD collection, for free, no login required. I jumped into Wagner’s Ring cycle at Die Walkürie, missing the first one (Das Rheingold). The staging was so stunning and the story so mesmerizingly psychotic that I was hooked. I watched the following two operas over the next two days, Siegfried and Gotterdämerung. That’s about 12 hours of opera when you count the extras for each show, which I also watched.

I looked ahead to see what was coming up, and saw that Macbeth was on the docket, so I set a date on my calendar to watch it. It was one of the most exciting stagings of Macbeth I’ve seen, and the music added to its emotional range. Even in Italian the story was easy for a Shakespeare buff to follow, and I found I enjoyed it more when I ignored the English subtitles and just let the music and the action speak for themselves.

That experience reminded me of seeing Die Lustige Weiber von Windsor (The Merry Wives of Windsor) at the Monbijou outdoor theatre in Berlin in 2016. That show was performed in German with English 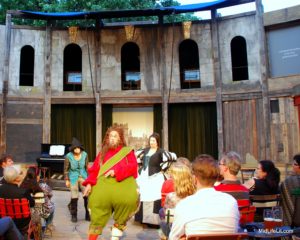 subtitles projected on a screen (you can see it in the upper right of the photo) but I found it easier and more engaging to just focus on what was happening on stage.

Which is a perfect segue to Verdi’s Falstaff (1893), the next Shakespearean opera on the Met’s daily stream schedule. Based on The Merry Wives of Windsor, Falstaff is an unusual opera because no one dies. Instead, the show is a joyous – and hilarious – celebration of life.

Falstaff at the Met was performed in Italian with English subtitles. The Met updated the setting to 1950s British suburbia, which in my opinion is fairly true to authorial intent; The Merry Wives of Windsor, unlike most of Shakespeare’s plays, was specifically intended as a piece contemporary with the time and place of its performance. A purist might even argue that it should be set in today’s world, and that setting it 70 years ago turns it into a period piece. That’s neither here nor there in terms of Verdi’s opera, which is a step removed from Shakespeare’s material, encouraging even more liberties with performance choices.

In writing the libretto for Falstaff, Verdi’s longtime collaborator Arrigo Boito combined The Merry Wives of Windsor with bits from both parts of Henry IV and evocations of Henry V. Orson Welles did something similar with The Chimes at Midnight over 70 years later, and that show I saw in Berlin ended on a downbeat note with Falstaff’s death from Henry V.

So, early in Falstaff Act 1, we got what was essentially the Honor soliloquy. In Act 2, Falstaff gaily remembered being slender enough to fit through a ring. Near the end of Act 3, Falstaff bemoaned that he was both witty and the cause of wit in others. And Bardolph was said to have “breath like an onion,” recalling in advance his being forced to eat a leek.

The Met clearly had fun with sly references to other Shakespeare plays. So, when Falstaff appeared in a club setting, he was decked out in a country check suit and snazzy yellow argyle knee socks a la cross-gartered Malvolio in Twelfth Night.

As with Shakespeare, the story moved fast. The sheer vastness of the Met stage allowed many parts of the story to be shown nearly simultaneously, instead of in sequence as a smaller stage compels. For example, in one vast scene set on the floor of a huge restaurant, we had the entire women’s story of discovery and plotting for revenge play out on one side, while the jealous Ford hatched his own plots with his fellow men on the other side. Nan Ford and Fenton courted each other in the middle and under tables. And Pistol and Bardolph ranged freely and thieved brazenly.

A Shakespeare buff would notice that George Page was written out of the opera entirely, with the Page’s daughter Ann assigned to the Fords with a slight alteration to her name. Shallow, Slender, and Evans are likewise trimmed out with the necessary adjustments.

But Falstaff remained an outsized character, larger than life in so, so many ways. Turning him into an opera just barely contains the infectious enthusiasm with which he crashes through daily life. I think Falstaff is what Elizabeth I had in mind when she apocryphally ordered Shakespeare to write a play about the fat knight in love.

Falstaff gives us Falstaff as he should be, eating, drinking, conniving, and singing, all at the top of his lungs.