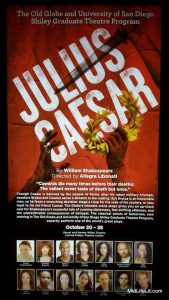 I took the family to see Julius Caesar at The Old Globe. The show was part of The Old Globe and University of San Diego Shiley Graduate Theatre Program, so the performers were MFA candidates. We’d seen a few of them before at The Old Globe in Much Ado About Nothing and The Tempest.

Although I’d seen the BBC Shakespeare version of Julius Caesar (1979), and also a BBC Play of the Month version (1969, well worth seeking out for Edward Woodward’s Cassius), this was the first time I’d seen the play live. Both recorded versions were done in Romanesque period dress; this live performance was done in the round with hints of period dress and – especially as the play progressed and the focus turned to Mark Antony and the Triumvirate – blatant nods to modern dress.

The play began with something of a framing device, as boisterous mechanicals presented a bawdy play extempore in which Caesar’s military triumphs were celebrated and Caesar and Calphurnia’s failure to have a child and heir was gleefully mocked.

The casting of women as Brutus and Cassius and men as Caesar, Mark Antony, and Octavius almost made the play a commentary on the struggle against the patriarchy. My teenage son supported Team Caesar, insisting that an enlightened dictatorship is the most efficient form of government. History would seem to support him; the Roman Republic lasted about 500 years, the Roman Empire that had its genesis in Julius Caesar but was set into motion by Octavius lasted 1,500 years if you count the powerful eastern half that became the Byzantine Empire. Even longer if you count the still-powerful, still-patriarchal church centered in Rome.

My wife and I, though, were Team Brutus people, although the reality is that they were oligarchs who, rather like the American revolutionaries (ahem, looking at you Hamilton), were largely protecting their own interests.

I especially liked this Mark Antony’s disingenuousness, a watchfully manipulative characteristic that moved to the fore as the play progressed. This Cassius, too, was insincere, so the contest was really between Cassius and Mark Antony, two equivocators, over the fate of honest Brutus. I liked how the triumvirate were dressed in shiny, modern steel gray suits with Romanesque sashes of red. And, I thought the doubling of Caesar with Strato, who holds the sword for Brutus to run upon, was a nice finishing touch. 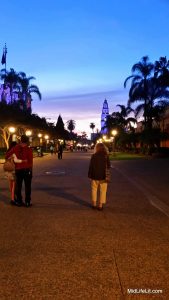 In all, a perfect evening: Shakespeare, a beautiful fall evening in Balboa Park, and a deep, long conversation with our teenager, what could be better?