It wasn’t intentional; in fact, both were last-minute things. But, I ended up seeing seeing two of Shakespeare’s plays in one weekend. That’s not quite a festival, but it’s more than I usually get to see.

On Thursday, I learned that A Midsummer Night’s Dream would be closing Sunday at San Diego City College, so I got tickets for Friday night’s performance and we made a big family night out of it. Although I’ve seen a few productions on DVD and streaming, this was my first time seeing it live.

The production set the action in a wharfside New York alley circa 1953. Theseus was the CEO of the slightly seedy Athens Insurance Company, and Oberon and Titania beatnik leaders. “The Boy” was an encyclopedia of beatnik knowledge.  Few other changes were needed: Hermia, Helena, Lysander, and Demetrius remained establishment youths; Puck retained his mysterious, magical qualities; the rude mechanicals remained solidly working class.

The cast of mostly young theater students was energetic, and their enthusiasm was infectious. Any scholarly Shakespearean depth that was diffused in delivery was more than made up for in sheer joie de vivre. It’s a fun play, and fun is the way to play it. 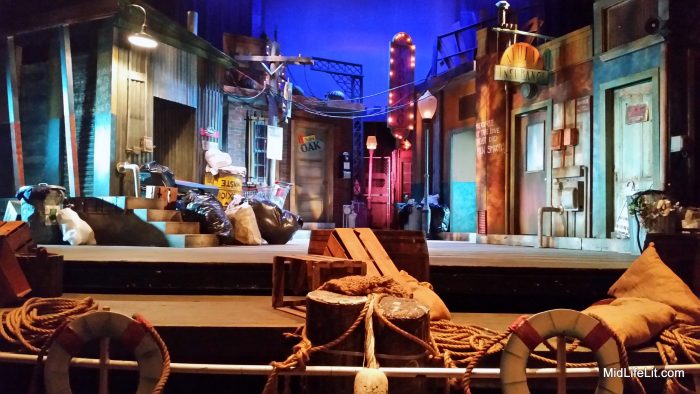 The set design was exceptional for its detail and depth, and the director encouraged everyone to take pictures of the stage and post them online as part of the theater department’s promotional efforts. I especially liked the wire-frame donkey’s head fitted to Bottom, which conveyed the right impression while allowing the audience to see Bottom’s facial expressions. Theseus/Oberon was doubled but Hippolyta and Titania were played by different young women, which lent a frisson of infidelity to the alpha male/s. Jazz music and dance numbers rounded out a thoroughly entertaining performance. Well roar’d, well run, well shone, and well played San Diego City College cast and crew!

Then I found out that Sunday was the final day of on-demand streaming of Cheek by Jowl’s production of The Winter’s Tale, a recorded livestream from the Barbican Centre in London. So, Sunday afternoon I settled down to watch. I’d seen it live at The Old Globe a few years ago.

Cheek by Jowl delivered a minimalist, yet exquisitely engineered stage on which performances simmered to explosion. In a stroke of genius, Leontes’ son and heir Mamillius was played as a precocious child perhaps on the autism spectrum, which seemed connected to Leontes’ inexplicably intractable delusion and later unyielding self-abuse. Leontes’ own position on that same spectrum was the neatest explanation I’ve seen for his behavior. Another sweet twist: the appearance of Polixenes and Camillo in disguise at the sheep-shearing festivities in Bohemia was echoed by the doubling of Hermione/Dorcas and Paulina/Mopsa.

While the live audience stretched their legs for the interval, the recorded livestream had an interview with the founders and directors of Cheek by Jowl, Nick Ormerod and Declan Donnellan. One key takeaway came from Nick Ormerod, talking about the minimalism of the set (in stark contrast to the City College production): “The essence of the theatre is in the imagination of the audience.”

And here’s rather longer excerpt from Donnellan, about Shakespeare’s writing:

“I don’t think that he was some genius who spent hours and hours and hours, sweating, sweating, sweating; it doesn’t feel like that way to me. It feels like he was somebody who wrote fast … it was intuitive. And every now and then, when there are some laborious stretches in Cymbeline, when you feel he has maybe sweated a bit over something. But it’s not very often. But at his greatest, you know, it comes burning off the page.”

This production of The Winter’s Tale came burning off the screen, a powerful show that I feel privileged to have seen.

And that was my personal Shakespeare weekend, half shared with family and the other half savored on my own. Perfect!