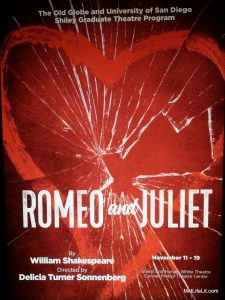 The Old Globe, in partnership with University of San Diego, offers the Shiley Graduate Theatre Program, a two-year MFA course in classical theatre. It admits only seven students per year, selected from applicants nationwide. This was the first time I’ve seen an MFA performance at The Old Globe.

The Old Globe is a campus of three theatres. Romeo and Juliet was performed in the most intimate of them, the in-the-round Sheryl and Harvey White Theatre. The closeness to the actors added to the sense of immediacy as the play unfurled rapidly almost within arm’s reach.

I liked the way the play was divided, with a boisterous, joyfully bawdy first half and a second half heavy with foreboding. The intermission came at the announcement of Mercutio’s death offstage, a great way to stage the turning point.

Most productions set up Mercutio and Tybalt as opposites: a funny, street-wise Mercutio facing off against an icy, ornately cultured Tybalt. This one offered a refreshing change: Mercutio and Tybalt were paired punks, a smoldering love/hate coupling emphasized by Tybalt being a tattooed young woman. They danced with each other, erotically, at the Capulet’s party, a heated reflection of Romeo and Juliet.

But if Mercutio and Tybalt echoed each other in dress and behavior, their weapons were characteristically unique: Mercutio wielded a katana, Tybalt a matched pair of long daggers. The pivotal duel was a gleeful, sexually charged power play on both sides until Romeo got in the way. Mercutio’s death seemed accidental, with Tybalt looking on in horror before fleeing. As the lights closed the first half, there hung in my thoughts a hint of edgeplay gone terribly wrong. And, as the second half opened, Tybalt returned as if going to the gallows, and her defense against Romeo’s furious attack seemed half-hearted.

Creating a Mercutio-Tybalt relationship made Tybalt’s death at Romeo’s hands much more believable. I’ve always had to suspend disbelief that Tybalt, an acknowledged expert fighter, could lose to Romeo. But, if Tybalt was indeed Mercutio’s lover, her willingness to follow him in death neatly foreshadowed the deaths of the principals.

I’ve seen Romeo and Juliet live at least twice before, both excellent but conventional productions, and own two versions on DVD (BBC Shakespeare and Baz Luhrmann). This live production showed how performance choices can remake the story afresh. We all know the play and how it ends tragically, but the creative team managed well the trick of making me feel like everything might come out OK after all. That, I think, is the key to Shakespearean tragedy in performance: giving real glimmers of hope before it goes dark for the last time rather than an inevitable glide to black.