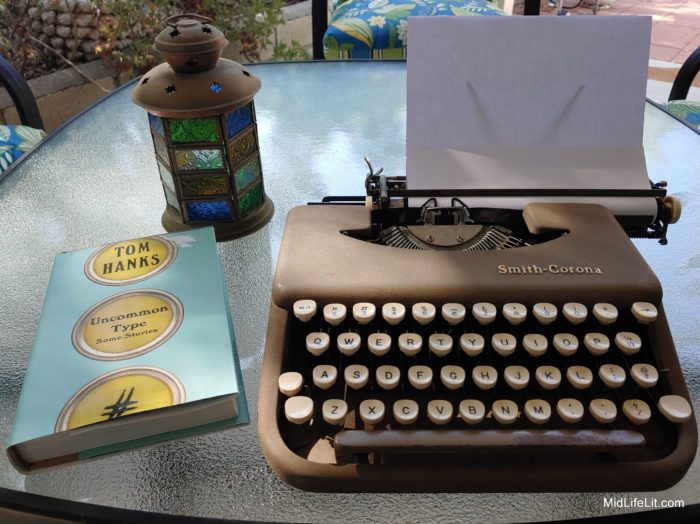 I found this book in a local Little Free Library. Uncommon Type is a collection of short stories written by movie star/director/screenwriter Tom Hanks, which is why his name is significantly bigger than the title of the book. That said, the stories themselves are excellent in a “New Yorker” sort of way. The stories are loosely connected by the presence in each of some kind of typewriter. Apparently, Tom Hanks is a fan of vintage typewriters, which shines through in “These Are the Meditations of My Heart,” in which an old repairman lovingly extols the virtues and purposes of a Royal Safari, a Hermes 2000, and other machines. That’s not the point of the story though, which is why it’s my personal favorite.

At any rate, the photo shows it with my own Smith Corona Skyriter, the original business laptop, designed to fit on an airliner seatback tray back in the days when secretaries accompanied executives on cross-country trips to keep up with work and correspondence.

I love the way the keys are deeply dished, so they feel like extensions of my fingers rather than something my fingers are manipulating. The shield-like shape of the keys and the ample three-dimensional space between them prevent mis-strokes. They’re perfectly balanced, like piano keys. Note the wear on the spacebar in the photo above, evidence of over a half century of use by right-handers.

Here’s another shot of the Skyriter, this time nested inside its leatherette carrying case. See that swooping line of the paper/supplies pouch on the lid? Everything about this typewriter is designed. It evokes movement, taking flight. In this day of low-cost airlines, we forget that air travel was a luxury just a few decades ago. This isn’t just a business machine. It’s the business machine of the high-flying executive jet-set.

I even found that I wrote differently with a typewriter than with a computer; it’s a more tactile process, somewhere between keyboarding and handwriting. With a pen and paper, you create a sentence and with a keyboard you enter it, but with a manual typewriter, you build it.

My first microportable typewriter was an early 1960s two-tone tan-and-cream Triumph Tippa, which was a marvelous piece of space-age West German craftsmanship. I sold the Tippa to get this more traditionally built Skyriter because the Skyriter was made in the USA, which is also why I chose it over the similarly sized Swiss-made Hermes Rocket. To me, the Skyriter typed better than the Tippa did too; the old-school all-metal construction made it feel more solid and therefore more responsive. I preferred both the Tippa and the Skyriter to the Rocket because of their larger carriage return arms. I’m a ham-fisted typist at my best, so a big return arm is still important. On that note, I also remember setting the key force adjustment to “H” for “heavy;” I think neither the Tippa nor the Rocket had that feature.

When laptop screens improved to the point of functionality out in the real world and internet access became indispensable for work, I stashed away the Skyriter and pretty much forgot about it until the stories in Uncommon Type reawakened my affection for the old machine.

I think I’ll take it for restoration/servicing soon. Now that I’ve pulled it out, I want to use it again. There’s something irresistible and magical about clacking slugs onto a page!